When the craving for the good ol’ comfort of home kicks in, Frikadellen is the way to go around here at Cook-N-Dine. Yes, Teppanyaki has Japanese roots, however the Cook-N-Dine as well as our owner comes from Germany; just like these delicious little meat-patties. For this recipe, we prepared the Frikadellen “dad style”, in honor of the owner’s father. In order to provide some balance and colorful contrast with this meal, we decided to cook up some yummy veggies with it. (Recipes + link to printable versions follow at the end.)

We started by chopping up all the veggies: sweet potatoes, leeks, red onion, red bell pepper, scallions, baby bella mushrooms and garlic. Yum! Then we mixed the ground beef and ground pork, 1lb of each, with 2 large eggs, 2 soaked Chicago rolls, a dash of white vinegar, salt, pepper and sweet paprika. 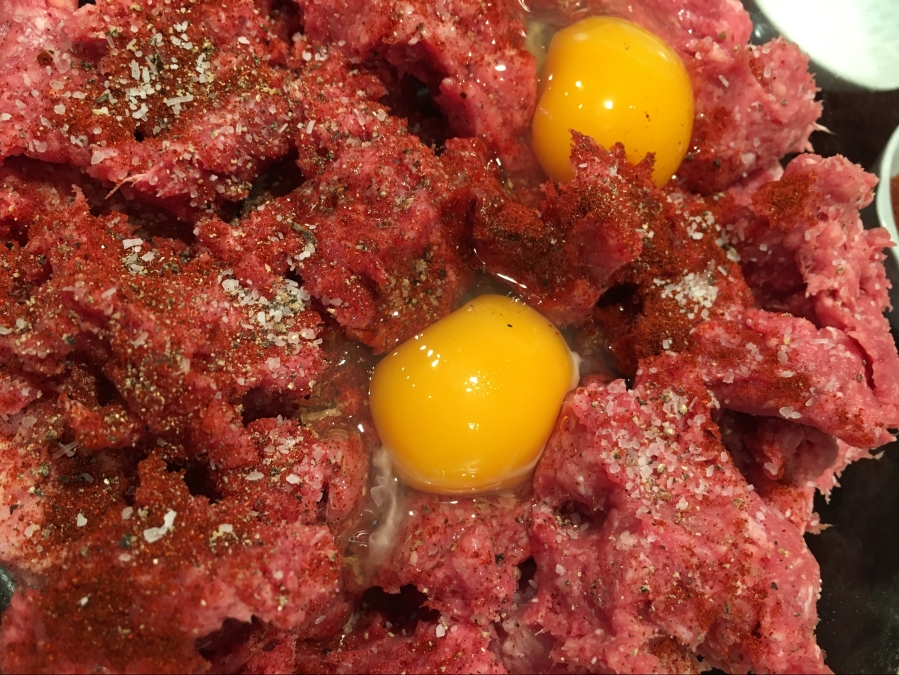 The key here is to mix the ingredients well without overworking so the mixture doesn’t become dense. If you find that the meat mixture is too moist to handle, add some breadcrumbs. Start preheating your Cook-N-Dine temperature at 5. While the cooktop preheats, use the meat mixture to make 1″ to 2″ diameter patties, about 1/2″ thick. Bread each patty with panko or regular breadcrumbs and make a small indentation in the center.

One of the benefits to meals on the Cook-N-Dine Teppanyaki is that you can prepare your main and side dishes all on the same surface, meaning less dishes and more focus. Typically when cooking meat and veggies in one meal on the Cook-N-Dine, we like to put the veggies on first. However since the Frikadellen take a little longer than a cut of meat, we decided to reverse the order this time. To cook the Frikadellen, turn the temperature up to 8-8.5 after preheating. Once the temperature is reached, take a paper towel folded into a square and dip it in a high-heat cooking oil to wipe the hot cooking center with before setting the patties down.

After about 8 minutes we flipped the patties over as the bottoms started to brown. Once the other side browns, move the patties to the edge of the hot cooking center so they remain warm while the veggies cook. Leave the patties uncovered so they don’t get soggy. With the teppanyaki temperature set at 8.5, it’s time for the colorful veggies! 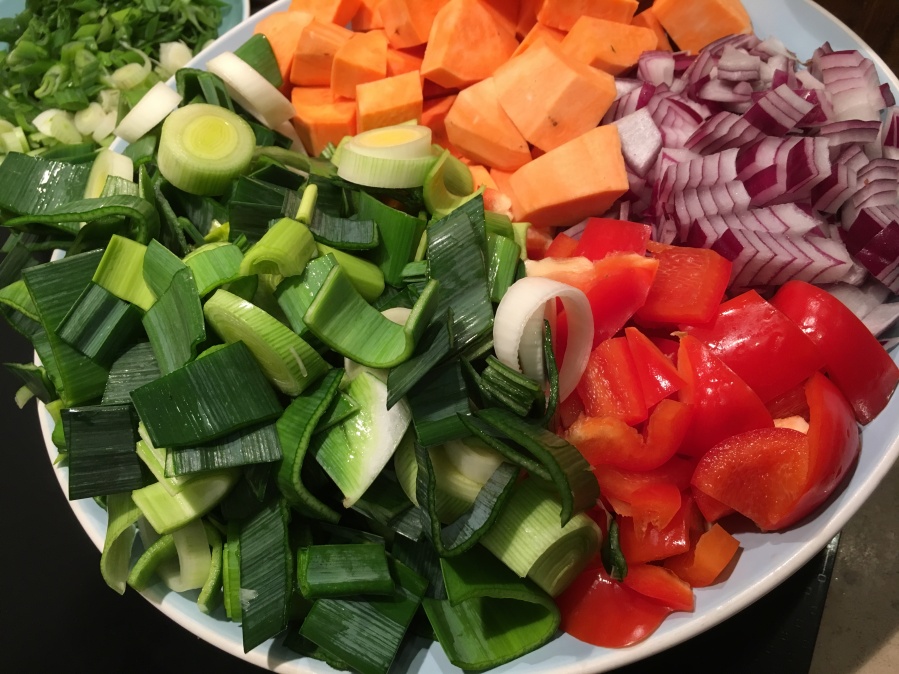 First we used the spatulas to remove any remaining bits of Frikadellen, making sure to leave enough oil and fat to cook the veggies in. The sweet potatoes take the longest to cook, so we started off by placing them on the hot cooking center without any other veggies, allowing enough space between the pieces so they could brown. (Side note: the bigger your pieces, the longer they will take to cook. We had cut about 3/4″-1″ pieces, however just over 1/2″ would be ideal.) Once the bottoms started to brown, we turned them over and spread them out.

Once the other side of the sweet potatoes began to brown as well, we moved them over to the warm edge like the Frikadellen. The warming area does continue to cook them a bit, so make sure you don’t overcook them in the hot center before pushing them out to the edge. We then placed the sliced mushrooms to cook at the hot center, allowing them to “sweat” out their excess moisture. 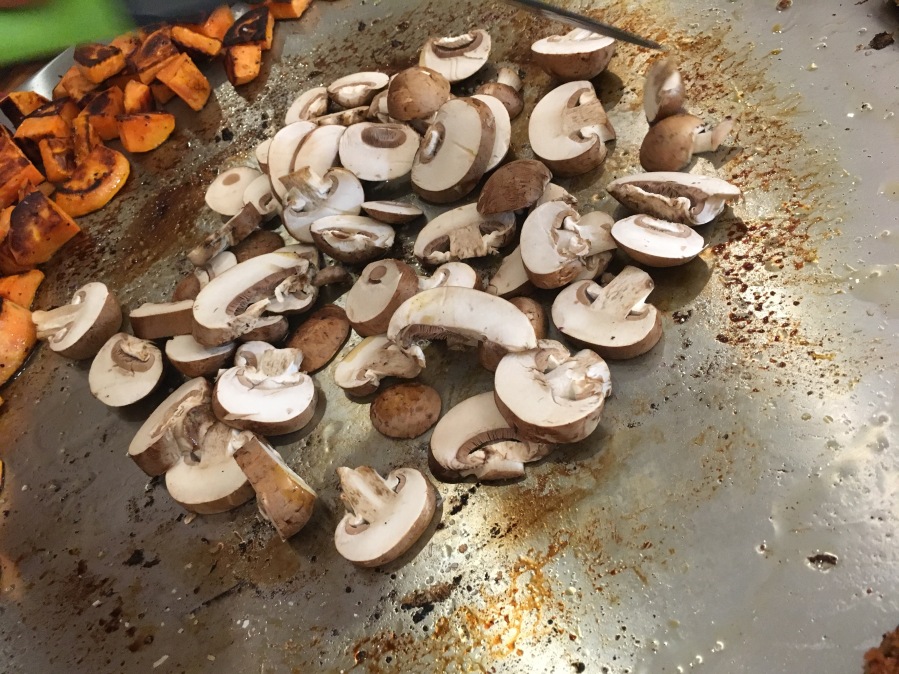 Since the point of “sweating” the mushrooms is to reduce the amount of moisture in them, therefore allowing their flavor to be enhanced, there is no need to add additional cooking oil before placing them on the hot cooking center. After a couple of minutes, we tossed and turned the mushrooms to brown them evenly. Once most of the moisture evaporated, a proper “sweating” of the mushrooms was complete and we moved them over to the side. Adding a little more cooking fat to the hot center, we then started to cook the rest of the veggies.

The colorful and delicious array of leeks, onions and red peppers cooked for 7-8 minutes with some tossing and turning, allowing them to soften but still retain a slight bite. Then we lowered the temperature to 5 and mixed the sweet potatoes and mushrooms back in, seasoned the mix with salt and pepper then topped it with the fresh scallions. You can also add a drizzle of fragrant olive oil for a bit of extra flavor, if so desired.

This Sweet Potato “Hash” was inspired by Sam The Cooking Guy.

You can find the printable recipes for Dad’s Frikadellen and our take on the Sweet Potato “Hash”, along with other Teppan-style recipes at our Cook-N-Dine Recipe Page.